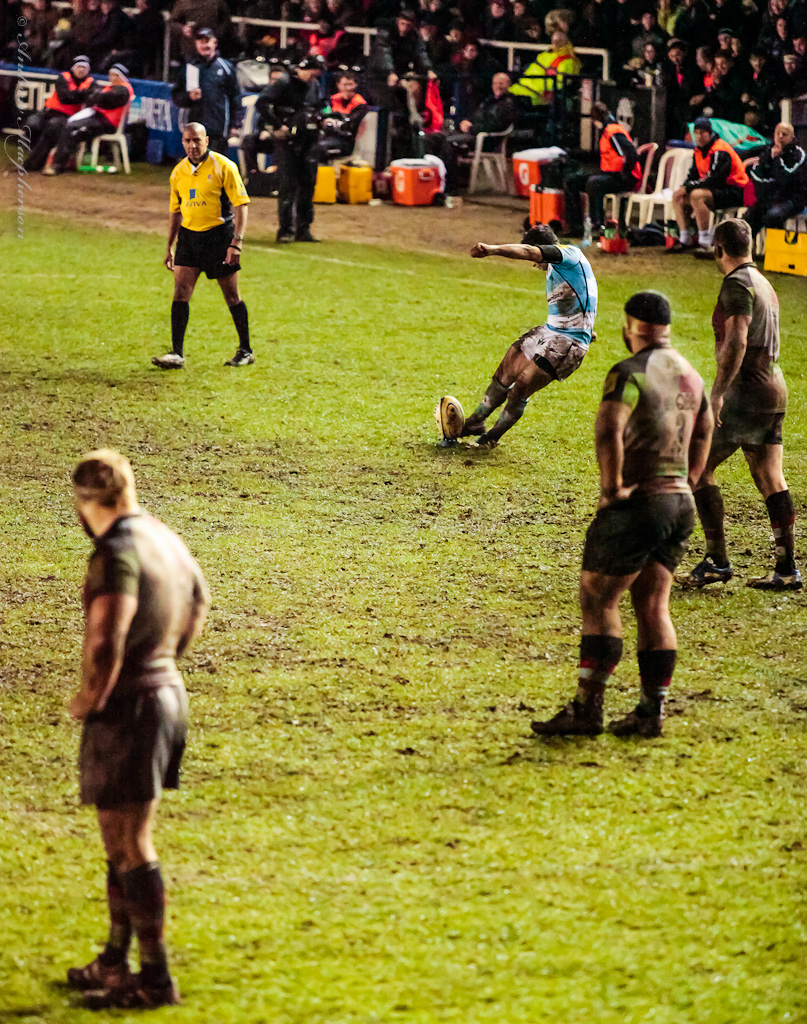 On Saturday I had a welcome unexpected chance to go to a Harlequins home game, and saw it as a chance to try some of the ideas that I’ve been picking up from Scott Kelby’s blog though just from the stands, rather than the privileged sideline access of the professional.

Kick-off was at 17:30 a quarter hour after sunset, so this was strictly a floodlight exercise.  I quickly found that the exposure on the field of play was fairly constant, but there was huge risk of variability if one let the camera “do it’s thing”so went fully manual, f2.8, 1/800th & ISO on H1 (12800).  The other half of this exercise was processing in LightRoom 4 beta, and the noise removal could only be better than the already good results one gets in Lr3.

I had also turned on GPX Master+ on my iPhone to import my location into Lr4 and geotag the photos.  That was slightly bizarre as the track screenshot shows,  I was actually sitting under the stroke of the ‘A’.  The GeoTagging process itself was beautifully simple; when I got home i turned off track logging on the iPhone.  Before The images had finished importing into Lightroom, the track file was in the Dropbox folder on the Mac.  It was then a case of switching to the Map module and reading in the track file (which was extremely good for when one was moving)  I then selected todays photos, and under the Map > Tracklog menu set the offset between the time on the camera and the GPX track.  Finally under Maps > Tracklog clicked “Auto Tag selected photos”  It’s such a relief not having to re-read the metadata after running an external tagging program.

I had a pair of normal 8×60 binoculars with me and was struck by the huge difference with my 200mm lens — in binocular terms 4×20, it really brought home what I had been reading about the need for long fast glass for this sort of shot.  A frame filling image was only possible for relatively close play; on the other hand I have the Megapixels to crop…

Anyway for your “amusement and despair” from the ground of the Masters of the Revels here are a few shots, comments welcome